The T-Series L2C – An Active Holster for an Active Lifestyle

Blackhawk gets a lot of deserved crap from their line of SERPA holsters. So much crap that a lot of people simply don’t consider Blackhawk when shopping for a new rig, and that can be understandable. However, that may cause you to overlook some rock-solid holster options, namely the T-Series. I’ve got the T-Series L2C for my P365 and have been putting it through its paces.

I first noticed the L2C when I was working with a plainclothes Sheriff’s Deputy on a local project involving disaster relief. We got to talking, and he mentioned how investigators now carried SIG P365XL handguns with Blackhawk L2C holster, which replaced their Glock 23s. Color me intrigued, a small, active retention holster that was duty ready and well suited for concealed carry. I knew I had to take a peak.

The T-Series L2C represents a slim and minimalist option from most of the T-Series. It’s rugged, reliable, and relatively small, and concealable. Predictably it’s all polymer with a variety of options to attach it via a belt. This includes a Tek-Lok style attachment and a more traditional belt loop. 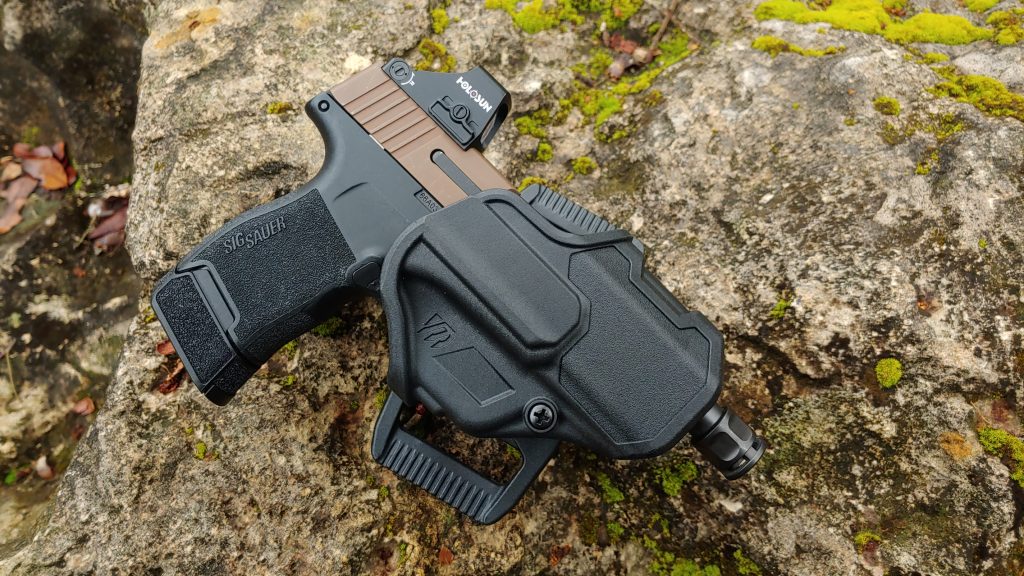 Defeating the active retention device doesn’t require your trigger finger but your thumb. It’s easy to deactivate the retention on a natural firing grip and doesn’t present the same issues the SERPA had. The bottom of the holster is opened, so my little compensator fits, and the top of the holster is cut decently low, so optics are also accommodated. The T-Series L2C fits both the P365XL and the standard P365.

For a police officer, active retention makes sense, but does it for concealed carry? Well, most of the time, no, it doesn’t. It’s unlikely you’ll find yourself in a situation where your day-to-day rig won’t retain your firearm. That’s assuming you use a good holster, obviously. 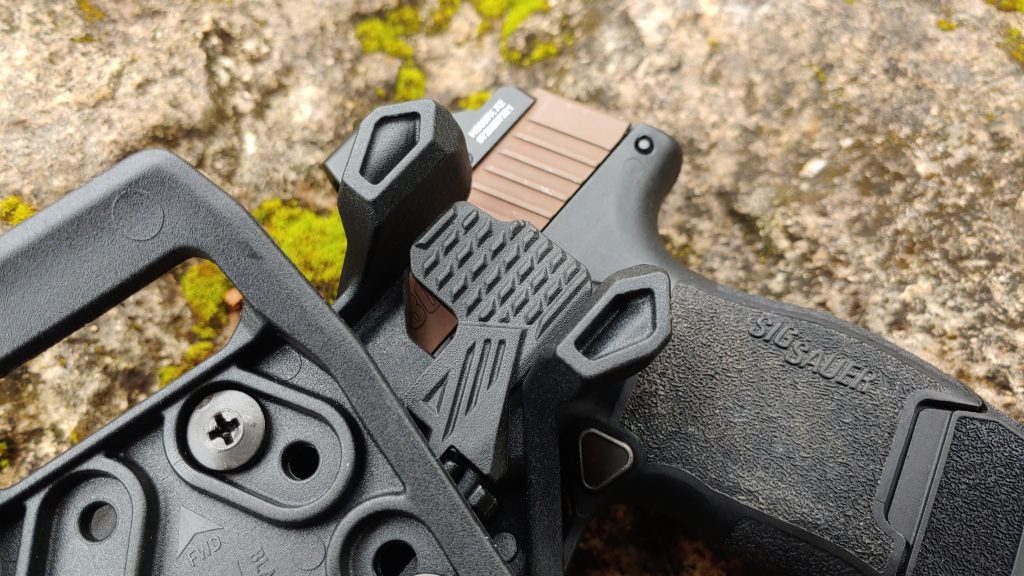 Most of the time, it isn’t all of the time. With that said, I like to live a quasi adventurous life. I like to hike, hunt, fish, kayak, and even bike off-road every now and then. In those activities, my standard appendix rig just isn’t super comfy, and it might not retain the firearm in a tumble or fall. Lord forbid my firearm falls into the lake while fishing.

I’ve wanted a low-profile holster with an active retention device for these adventures. Let’s call it adventurous concealed carry. Currently, I typically pack a passive holster with the passive retention maxed out and tightened down. The T-Series L2C promises a comfy concealed option that will ensure my firearm stays put.

First off, the L2C holster fits the weapon well. It clicks into place, and the active retention takes over. From a safety perspective, the holster fully encases the trigger and prevents anything from interacting with it. That’s a must-have and a prime priority. The rear belt loops and attachments allow you to adjust for cant, and I gave it that slight forward ‘FBI’ cant.

The retention device sits safely behind a pair of wings that protect it from your body when worn tight to the body. It’s a smart design that ensures the retention isn’t accidentally tripped when worn. The placement of the thumb-activated retention device is smart. When you establish a firing grip on your gun, your thumb naturally falls onto the device. 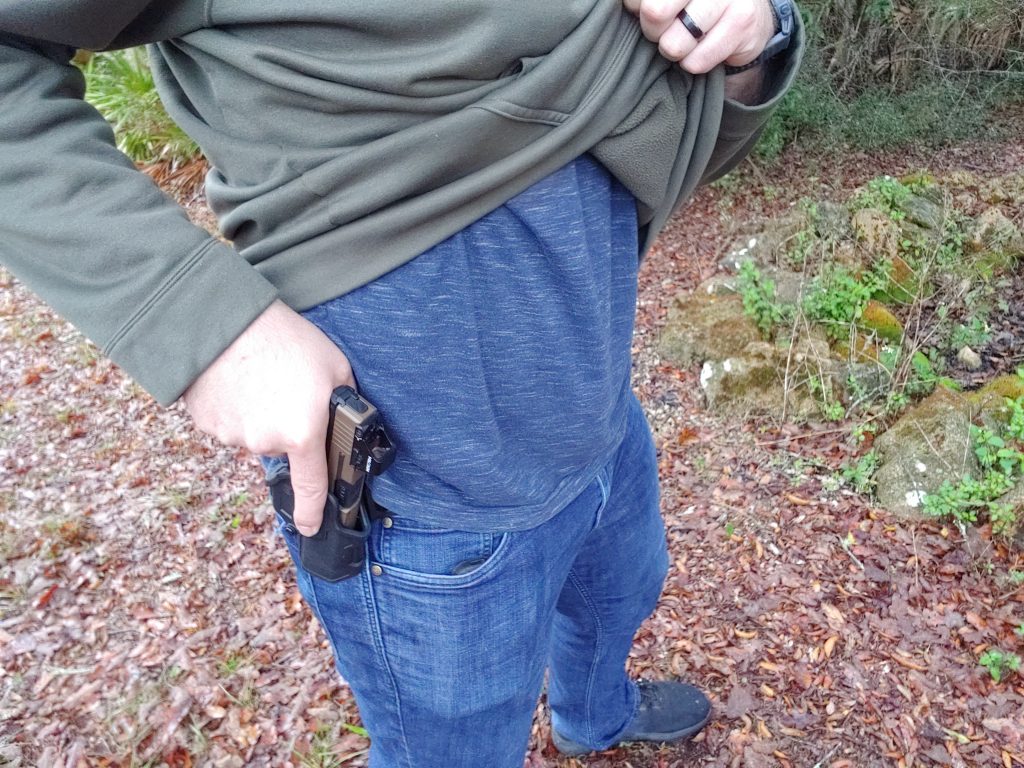 When you grip the gun, the device releases the firearm and allows you to draw with ease. Even if you begin to pull before you draw, the gun will still safely release, and you can draw easily enough. The T-Series L2C allows you to quickly and safely draw the firearm.

With a little practice, I could draw without impediment. It might be a little slower than my appendix rig, but not enough to cause concern. It’s just as fast as any holster that features passive retention and is worn strongside IWB. 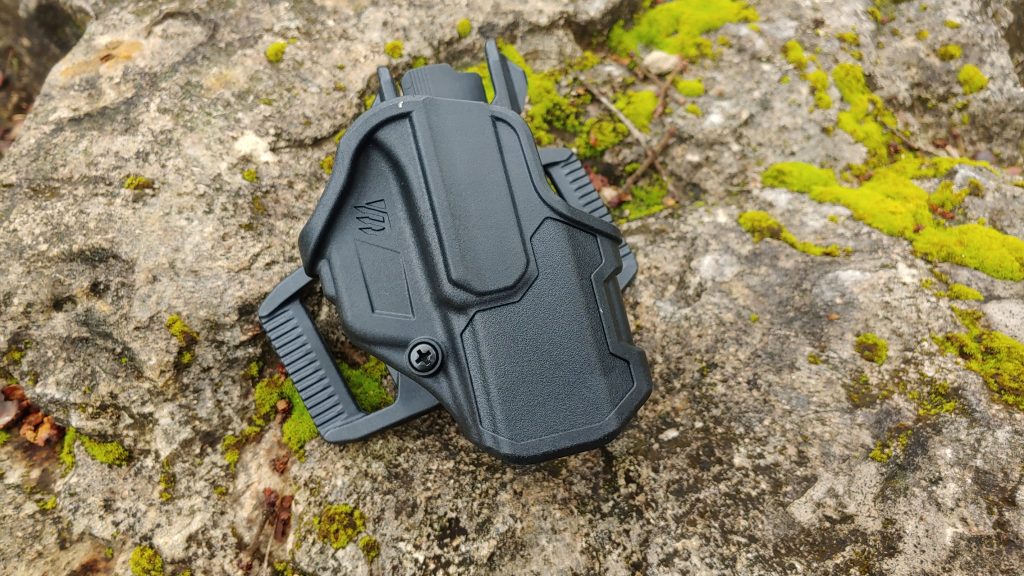 The same goes for reholstering. Your gun slides into place and locks via a trigger-mounted lock. The holster gives you enough berth to easily holster the weapon in a safe way.

Admittedly as an OWB holster, it’s not the best concealing weapon. There will always be issues with concealing an OWB rig. This particular rig doesn’t cling super tight to the body. It couldn’t, especially if you want to defeat the retention device. Concealing the T-Series L2C won’t happen with a form-fitting shirt. 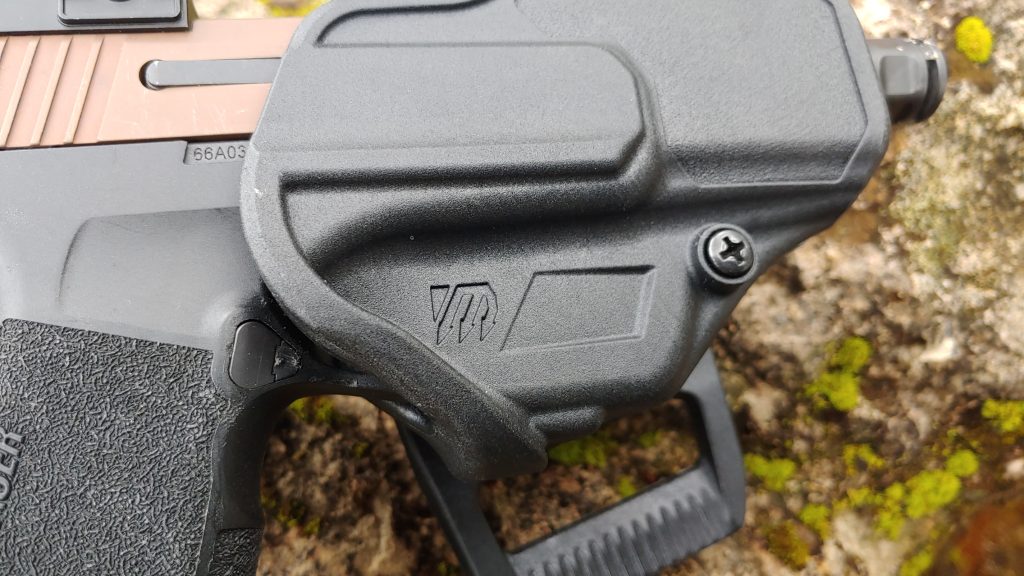 Tossing on a jacket, hoody, or slightly loose-fitting garment should take care of that problem. While it can be a little tough to conceal, the holster is super comfy. It doesn’t poke or prod when you carry the weapon, and you can hike, bike, sit in a boat, or do whatever in complete comfort.

Source
The T-Series L2C – An Active Holster for an Active Lifestyle is written by Travis Pike for gatdaily.com

Understanding Cartridge Choice in Pistols 9mm vs .40 S&W vs .45 ACP