SilencerCo: Dogs Have Ears Too

Anyone who has a dog claims they have “the best dog ever,” and none of them are wrong. Over time, dogs have become some of the closest and best companions; people are truly blessed to share life with them. Dogs serve many roles: helper and protector at home, companion or partner while traveling or working, and life-saver. As a result, dogs have so many job descriptions. One such company that respects those job descriptions is SilencerCo.

The Dogs of SilencerCo

“The one absolute, unselfish friend that man can have in this selfish world—the one that never proves ungrateful or treacherous—is his dog.” – George Graham Vest.

As social pack animals, dogs thrive off attention and affection. They are just as happy to provide that same level of attention and love back to people.

Humans have been living with dogs for over 15,000 years, and the bond is only growing more robust, especially with workplaces that understand and respect that bond and encourage dogs at work.

I am an avid dog lover who works every day with two dogs by my side. So when I visited SilencerCo’s HQ in Salt Lake City recently to check out the new Hybrid 46M modular Silencer for GunMag Warehouse, I did so with both canines in tow.

I was super stoked to see this company not only respected the bond between humans and canines but has adopted a work culture that embraces and welcomes that bond daily. My visit was on a Saturday, so I only met a few of the office pups. Yet, they were putting in the hours and loving every minute of it just like their humans. Both humans and office dogs were incredibly gracious to my two boys, as we were welcomed in with open paws at SilencerCo.

Dogs have proven themselves to be loyal, kind, understanding, and always there to lend an ear. In addition, dogs are always down to greet us with excitement, even on days that have proven to be exceptionally challenging. And for this reason, I know firsthand the benefit of a dog by your side at work. But don’t just take my word for it; according to Life Learn Animal Health, here is a list of the eight advantages of a dog-friendly workplace.

8. Office dogs get socialized rather than being left home alone.

SilencerCo fully understands the benefits of dogs at work, but they also take it seriously, as they should. SilencerCo went so far as to create a Dog Committee with an employee Dog Guide that explains the SilencerCo Dog Culture. In addition, all employees and pups must meet requirements/criteria and volunteer to help maintain a safe and clean work environment for both humans and dogs.

If this level of respect for dogs wasn’t enough, SilencerCo has even taken its consideration of our canines one step further. They created a campaign titled “Dogs have ears too.” 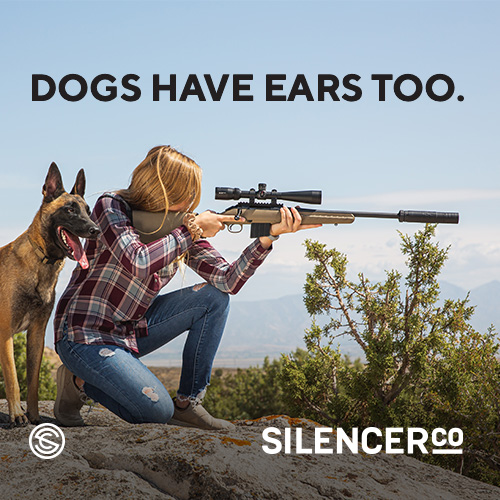 The basis of this is that projecting a dog to loud noises daily, such as that of a firearm, can lead to hearing damage in our furry companions.

Besides being cute, dogs serve duties, and some responsibilities are pretty important. Whether they’re herding cows, hunting birds, or game, acting as a vital part of a home defense plan, supporting people with disabilities, or simply acting as a companion unlike any other, dogs help humans daily. As if those duties aren’t enough, dogs also help prevent possible crimes and save lives, as in Military and Police canines. Some dogs in these roles are exposed to loud noises, including sounds of gunfire, noisy equipment such as helicopters or airplanes, and even loud machinery.

The noise level and damaging effects are significant, especially considering a dog’s acute sense of hearing. Dogs can distinguish sounds and pitches that we as humans cannot. Considering this, it makes perfect sense that SilencerCo is aware that the damage resulting from muzzle blasts might be far more traumatic to the dog’s ears than humans.

In the past, protecting a dog’s hearing has been overlooked, but it is now more common in the many fields that dogs work. Of course, SilencerCo is in the business of manufacturing Silencers which allows for a much lower sound decibel when a firearm is fired. Still, nonetheless, they are privy to the ramifications of continuous exposure to loud noises by canines.

A Silencer is one way to help protect the working or hunting dog’s hearing, but other options are available.

“Military working dogs (MWDs) have become a major part of the U.S. Military. From base security to dogs that accompany special forces on raids, dogs are indispensable assets, capable of running down bad guys on the field. In addition, a new technology known as CAPS (Canine Auditory Protection System) now promises to protect their hearing, ensuring that the rigors of working in the field won’t render an Army working dog deaf.”

I also stumbled across Mutt Muffs

Which are precisely what you would expect them to be, ear pro for dogs. They share on their website that “Noise-induced hearing loss is different from hereditary hearing loss in one fundamental way… It can be reduced or prevented altogether.”

If you work with your dog daily, welcome to the cool club. However, if your canine companion works daily with you, whether hunting or in a professional matter with firearms, we hope you will consider the available hearing protection options.

Thank you to SilencerCo not only for fully embracing our canine companions in the workspace but for being aware of their sensitivity to hearing complications and helping to provide a friendly environment for working and hunting dogs around the world.

About the Author: Sara Liberte (who clearly won the lottery when it comes to last names) grew up the younger sister to an Army Ranger…she blames that for everything (awesome) in her life. A photographer and videographer of supreme talent and utter disregard for inclement weather, arduous conditions, or little things like the law of averages. Sara is an eleutheromaniac who loves firearms, motorsports, motorcycles, and…well, all vehicles, really, as long as they’re the kind that gets dirty and generates adrenaline. She travels the US in a self-designed “Battle Van” with two dogs aboard. If you need to find her, you’ll have to look outside. Try moto-events, mountain ranges, or firearms classes on the web at saraliberte.com and @van_solo or @saralibertephotograpy on Insta.

Source
SilencerCo: Dogs Have Ears Too is written by GAT Staff for gatdaily.com